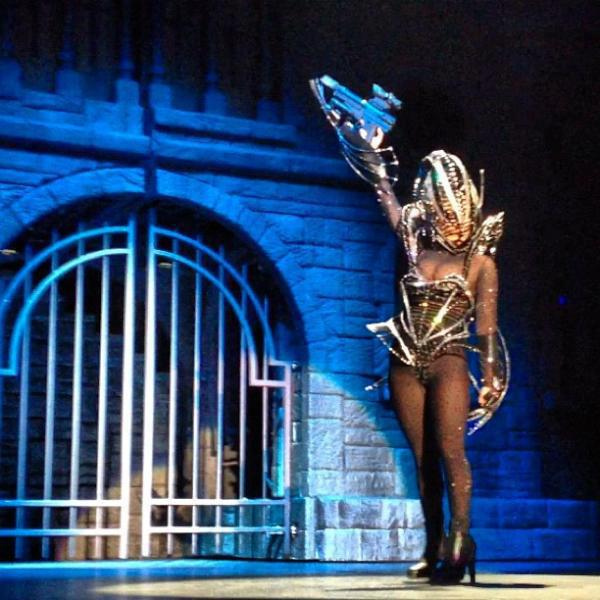 Lady Gaga has released new details about her 2012-2013 Born This Way Ball World Tour, including wardrobe collaborations, info about the stage setup and design, and more

The tour kicked off last Friday in Seoul, South Korea and the 100+ stop tour will take the Ball throughout Asia, Australia, and Europe, with more dates to be announced.

"It's been my life's dream to be dressed in Italian designers," said Gaga, and as such she has collaborated on costumes with today's biggest Italian designers including Versace, Armani, and Moschino. Lady Gaga also sought designs from other major designers like Calvin Klein Jeans, while also continuing to work with young, up-and-coming designers, like Void of Course, Kerin Rose, Tex Saveiro and Fred Butler.

"Lady Gaga is the present and the future," said Donatella Versace. "She is the most revolutionary and inspirational artist. She is fearless and daring. I can't wait for everyone to be surprised by what we've cooked up together!"

The Born This Way Ball Tour has been described by Gaga as "the tale of the Beginning, the genesis of the Kingdom of Fame," and the stage reflects this kingdom. In early 2012 Gaga tweeted out a sketch of the set design, revealing a giant castle with a center pit within the stage dubbed "The Monster Pit." The record breaking stage was designed by Mark Fisher and built by renowned production firm Tait Towers, who have previously built stages for the likes of U2, Madonna, and the Rolling Stones.

"The stage set for the Born This Way Ball is the largest scenic structure that's ever been built to tour." says James "Winky" Fairorth, CEO of Tait Towers "The precise architectural detail was not compromised at all due to the global touring schedule, and the structure can be built using no tools or loose fasteners during assembly."

The stage and set have many capabilities and functions including 30 active windows and doors, each with a custom scenic painted roll drop which will reveal different scenes within the various rooms of the Castle, two swing walls which open to reveal the 50 foot tall castle behind it, 620 feet of custom LED lights and two sets of automated castle gates that open and close to a full 180 degrees.

Moving this massive set-up from place to place has also proved to be quite the undertaking. It takes fifteen 53 foot long tractor trailers to move the castle and the main stage and there are approximately 200 set carts that all of the elements travel in. To put that in perspective, if all of the set carts were lined up end to end, they would span approximately 1600 feet in length, the equivalent of over 5 football fields.

Additional dates for the Born This Way Ball Tour are expected to be announced soon.