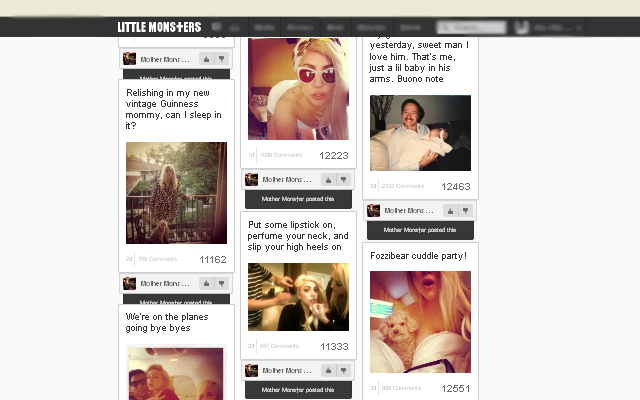 Lady Gaga has found a clever way of communicating with her fans using her new social networking site, LittleMonsters.com. The website has a built-in chat feature with a limit of roughly 50 people per room that only Gaga can bypass, allowing her to jump into any chat room at any time and speak with her fans. By entering into already-full rooms, Gaga is able to chat with her fans for a few minutes at a time without the press being able to listen in.

During these chats, she has been revealing all sorts of secrets that only diehard little monsters know about…until now. The following information has reportedly all come from Mother Monster herself during her chat sessions with fans. Everything reported here has been corroborated by multiple fans through written accounts and screenshots.

However, it is nonetheless advisable that you take all of the below information with a grain of salt, since none of it has yet been officially announced.

-Lady Gaga intends to release her next album in 2013, rather than this year as previously thought, but she promises it will be out “before spring.”

-A new single is coming soon, but it may not necessarily be from the new album.

-The full ad for her FAME perfume will be released by the last week of August.

-Gaga is working on a movie with photographer Terry Richardson that will be released in theaters about her life and “creative process.”

-There will eventually be a sequel to her ‘Telephone’ video, but no timeframe was given for the release.

-She is “sure” that Jo Calderone will be back at some point.

-Mother Monsters’s role in Machete Kills is “not very big” but it is “the perfect size to sink [her] teeth into.”