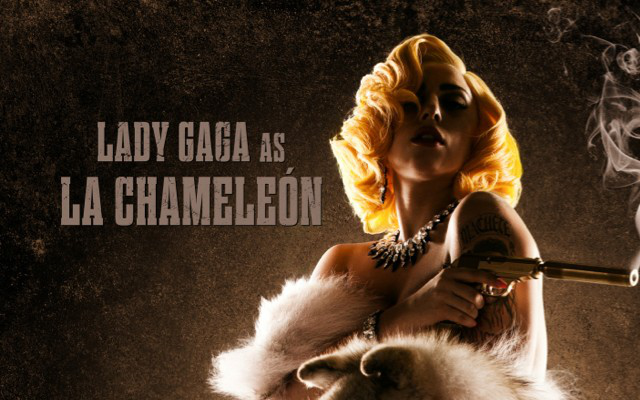 In news that has surprised both the movie and music industry, director Robert Rodriguez has confirmed singer Lady Gaga is to appear in his next film, Machete Kills. In a brief tweet accompanied by a movie poster (pictured), Rodriguez wrote:

"I just finished working with @LadyGaga on @MacheteKills, she kicked SO MUCH ASS! Holy Smokes. Blown away!"

Machete Kills is the sequel to Roidriguez' 2010 action film Machete, starring Danny Trejo as ex-Federale Machete Cortez who sets out on a mission of vengeance against his former boss who tried to have him killed.

Gaga's character, identified as La Chameleon on the poster, is not mentioned in any of the production notes seen so far, and little is known about her, but the singer did confirm the news was real and this would be the start of a new chapter in her career.

"Yes its true, I will be making my debut as an actress in the amazing MACHETE KILLS BY @RODRIGUEZ," Gaga tweeted. "IM SO EXCITED!!! AH! Filming was insane."

(click on here for full-size of the promo gaga poster)